“Ecology and Sustainable Development. Their place in Tourism”

Member of the Cultural Association and former manager for radiology services

Alison Womack was born in Glasgow, Scotland. After having moved around and lived in many places such as Scotland, England, Greece and Egypt, she attended a boarding school for army officers’ daughters in Bath, England. She was trained as a radiographer, working for the NHS with a particular interest in equipment and vascular studies. Becoming a manager for radiology services, she studied for an MBA with the Open University. She retired in 2007 and immediately moved to Amorgos, buying and renovating an old village house. Her life on the island has given her a better understanding of tourism and the effects on ecology and infrastructures. She assists in different projects on the island – cleaning paths, beaches etc. Alison Womack has been involved with the YPERIA Convention since her arrival on Amorgos and very much enjoys meeting the delegates from such varied countries and walks of life. Ιn 2012, she attended the Polish Tour Film Festival in Warsaw where she presented a short paper about the influence of the film «The Big Blue».

Title of her speech:

“Ecology and Sustainable Development. Their place in Tourism” 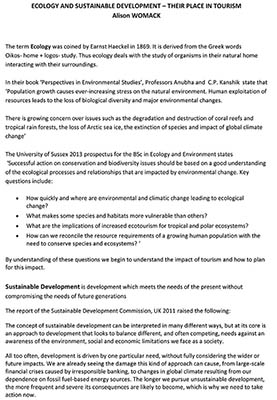