Amorgos is the island at the south-eastern edge of the Cyclades group and is a natural link in the chain of communication between the Cyclades and the Dodecanese. The island is long and narrow (33km in length and between 3 to 9.5 km in width) with a perimeter of about 112 sq. km and has a population of 1860 inhabitant. The landscape is rough and mountainous especially in the north, in Aegiali, where the highest mountain stands (Krikellos, 821m), and in the center of the island(with Profitis Ilias, 698m). Fertile valleys lie between the mountain ranges.
On the one hand the wild beauty of the mountains and on the other the green valleys , give the island a unique beauty .
The beaches of Amorgos are known for their cleanliness but not only. Their natural beauty combined with the endless blue of the Aegean sea, the hot sand and the rugged rocks create the perfect setting to escape from the routine of everyday life. One of the characteristic of the isloand is that it has two natural bay and port. The largest bay is at Katapola, an historical safe sea-refuge exposed only to the west winds. Aegiali’s bay in the north is wide and open. With the exception of some small harbours, the greatest part of the Amorgos coast-line is inhospitable and without harbours. Because of its geographical position – in front of many important Ionic cities (Ephesus, Bodrum, Miletus), Amorgos one of the first island Ionic tribes crossed in the Cyclades. Ruins of three ancient cities, Arsekini, Minoa, and Aegiali reveal important aspects of the evolution of the island. Amorgos, as all Cyclades, experienced pirate raids but also Venetians and Turkish occupation. However, the inhabitants of the island maintained their identity, customs and culture. The history of the place and its influences are reflected in the architecture of the villages but also in the way of life of the local. Amorgos is: natural beauty , historical & archaeological sites, religious byzantine monuments, entertainment, hiking trails…. 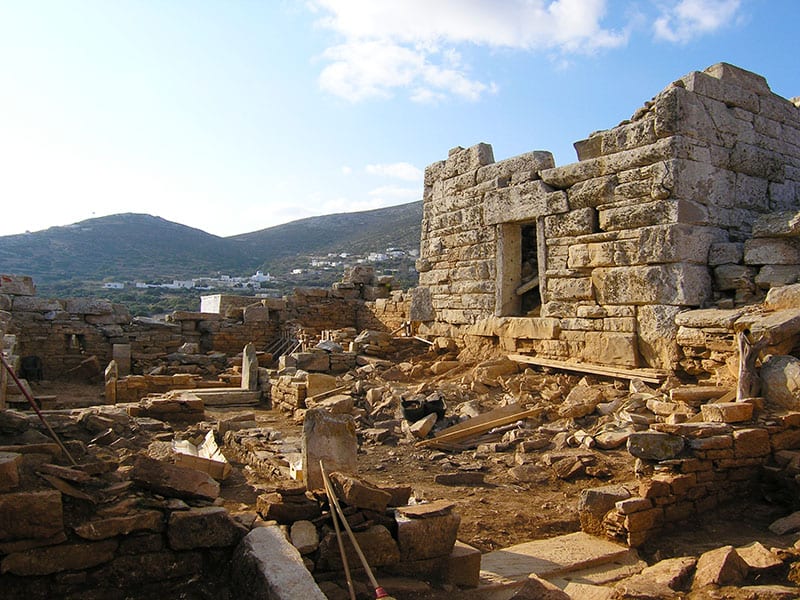 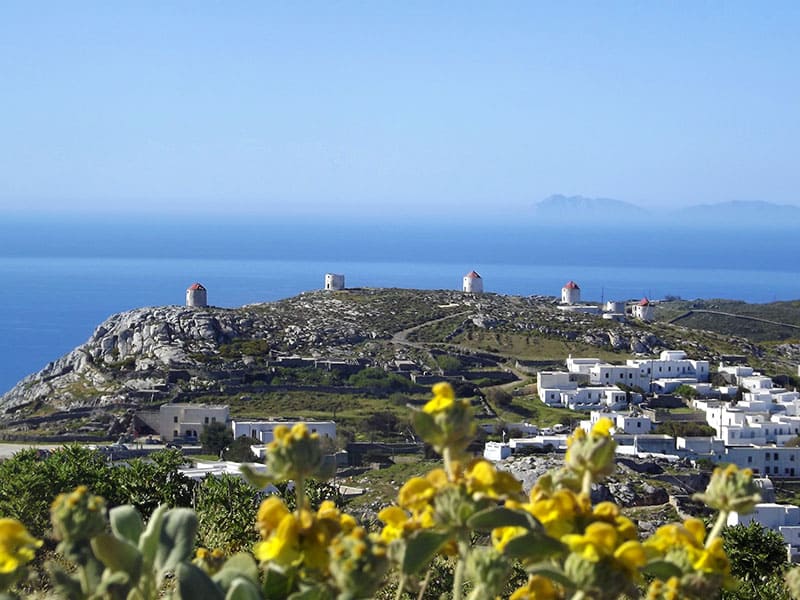 Amorgos has been inhabited since approximately 4,000 B.C. as shown by the finds on Mountoulia hill which rises above the harbor of Katapola. The 3rd millennium B.C. was a very important time for Amorgos as the Cycladic civilization had spread to the island. At the beginning of the 2nd millennium B.C., however, it was supplanted by the Minoan. This was the period when Minoa, the mythical resort of King Minos, would be created and thrive on Mountoulia hill. This period was followed by the Mycenean civilization and after that Amorgos would be colonized by the residents of Naxos who would found Arkesini. In the 7th century B.C. the Ionians from Samos would come to the island, to the area around Minoa, as well as colonists from Miletus who founded Aigiali. Starting in the 6th century B.C. Amorgos experienced significant economic and intellectual advances as it exploited its geographical position in the best possible way.
During the Classical period it played a part in the Athenian Alliance and subsequently was subjugated by the Macedonian state in 337 B.C. while forging close relations with the Ptolemies in Egypt after the dissolution of the Macedonian Empire. Amorgos was then known for its red transparent tunics called Amorgeia, Amorgians or Amorgides . These tunics are evocated in the play of Aristophanes, "Lysistrata". As a part of the Province of Asia in the Roman Empire, Amorgos, besides being a place of exile for eminent Roman officials, became famous for its wine and other products.

By the time the Byzantine Empire was founded, the island had already received its first Christians.
The deterioration of Byzantium and the growing threat of piracy in the Aegean drove the population into the interior of the island, a phenomenon that was completed in the 9th century. Two centuries later the Monastery of Panayia Chozoviotissa (The Virgin Mary of Chozoviotissa) was founded by the emperor Alexios Komnenos. The island was then subjected to Venetian rule and finally fell into the hands of the Turks with the Turkish admiral Barbarossa in 1537. In the years of the Ottoman occupation many residents left Amorgos and fled to other islands.
With their intellectual and religious center at the Chozoviotissa Monastery, the people of Amorgos developed economically until by the time it was a part of free Greece it had 3,500 inhabitants.
Amorgos participated to the Revolution in 1821 and was united with Greece in 1832.
During modern times Amorgos has managed to retain its unique character despite the depredations of emigration.

The monastery of Chozoviotissa is the most important religious monument of the island and one of the most important in Greece. Located on the south side of the island literally built into the rock at an altitude of 300m. above the sea, it used to be visible only from the sea. Particularly impressive it induces awe, admiration and you can't stop wonder how they managed to build on this rugged and crumble region in the early years of Byzantium .
The monastery was founded in the early 10th century and was restored by the Byzantine emperor Alexius Comnenus in 1088 , according to legend preserved in a silver winged. The name comes from the icon of the Virgin store inside the monastery. The tradition says that the image of the Virgin Mary miraculously arrived on the island from Chosovo or Chosova in Palestine. Chosivas or Koziva's location is found in the Holy lands near Jericho. The persecutions of the Christians in the 9th Century brought as by miracle the icon to Amorgos, a location that is said to have been chosen by the Virgin Mary herself.
There are 300 steps that separate the visitor from the entrance to the monastery. The building is 40 meters in length though its width is 5 meters. The monastery of unique architecture is composed of the monks' cells, the treasury, the kitchen, its ovens, its storage rooms, rooms for the bread baking, cellars for wines, rooms for the earthenware jars with oil as well as the lime pits and the wells -everything is built into the rock. It is a unique creation of human will against the natural elements. Inside the monastery are some priceless ecclesiastical treasures: Byzantine icons, ambries, manuscripts, etc.
The monastery celebrates on 21 November and for the occasion an important festival is organized.

The Archaeological Collection of Amorgos is housed in a beautiful 17th century patrician house - The Tower Gavras. In its construction ancient and early Christian materials have been used, shown by the support columns in the intrance arches and other architectural and sculpted pieces. Due to the long and tireless efforts of Lila Maragou, are presented in the halls of the mansion houses the finds from the excavations of the archaeological sites of the three cities of the island, Aegiali, Arsekini and Minoa: Sculptures, statues and reliefs, inscriptions, pottery, jars and various other finds dating from Bronze Age up to the Roman era, the 2nd AD century...

ANCIENT MINOA
The ruins of ancient Minoa, one of the three ancient cities of Amorgos , is about 3km away from the port of Katapolon , on the southern slope of the hill. According to archaeological surveys and excavations of important findings , it seems that a part of the town Minoa was inhabited from the Neolithic era. Ruins of houses and artifacts ( pottery figurines , arrowheads , etc. ) were revealed on the site. Similar findings reveal the continuation of life in the Bronze Age. The archaeological excavations have brought to light the remains of a settlement of historical times. The ruins of the settlement date from the 11th century BC and according to historical sources were founded by Ionian colonists. With a continuous habitation of the area building structures from the geometrical period haven't been preserved. On the other end, ruins of a marble temple from the 3rd century BC are still standing. The number of findings as well as the remains of buildings from all different periods of history provides important information about the civilization that flourished on the island. The ancient Minoa remained inhabited until Roman times, when people gradually began moving toward the port.

ANCIENT AIGIALI
Near by the village of Tholaria, in the area called "Vigla" stand the remains of the ancient Aigiali. In the area important building ruins and engraved inscriptions on rocks have been found. Still, the excavations on the known location of the ancient city haven't start. Remains of Hellenistic Towers are still visible.

ANCIENT ARKESINI
Situated 40 minutes away from Vroutsi, the Cycladic Acropolis of Arkesini was first established in the 10th to 8th centuries BC by settlers from Naxos and was inhabited until the middle ages when it was abandoned due to the threat from pirates. On the hill Kastela it has a view on the whole plain of Arkesini. During the early Cycladic period, walls, buildings and defensive towers were constructed and many relics, inscriptions, sculptures and pottery from this era have been found. There is also evidence that during the 3rd – 2nd centuries BC that there was regular contact with Rithymna in Crete. Roman tombs have been found, along with an acropolis dedicated to Aphrodite and Athena, and a road that was lined with colonnades and inscribed steles. The walls of the city (4th century B.C) are in surprisingly good condition. During the Venetian period extra fortifications were built but it is believed that Kastri became totally deserted due to to piratic raids, in the years of Venetian domination. Today many of the ancient structures can still be seen. The buildings standing today on the acropolis are all built with ancient local materials.
.

AGIA TRIADA - ARKESINI
Arkesini was one of the three most ancient cities of Amorgos and the tower of Agia Triada, which is invisible from the sea, was erected at the fourth century B.C. Perfectly preserved this ancient monument is of the best-preserved rectangular shape fortress in Cyclades. It is believed that this tower was one of the fortresses of the ancient city and was built to protect the local people from any sort of raids..

The Amorgian Chitons were famous in antiquity for their fineness of the weave and their intense red color. They were woven with thread made from an Amorgian plant (linokalami) cultivated all around the island. Amorgian clothing was known for being extremely luxurious and expensive. The particular red color that was used to dye fabric (lichen dyeingfrom Roccella Tinctoria) was found on the island. Probably manufactured in other areas, the best in quality have remained the Amorgian woven (ancient testimonies from Pollux and letters from Plato). The earliest reference to these tunics appears ​​in Lysistrata by Aristophanes from which we learn that Amorgian Chitons were very transparent and that women who wore them look almost naked.