The 8th Amorgos Tourism Film Festival was completed with great success. More than 100 people from 23 different countries of the world took part to the Festival which was held at the Aegialis Hotel & Spa in Aegiali, on Amorgos Island from 25th to 30th of October 2017.
A special tribute was given to the environmental education and lifelong learning, with 5 films related to the subject, which were screened not only in the Festival Hall but also at the High School of Amorgos, at the Elementary-Primary School of Aigiali and in 3 other venues for cultural events throughout Amorgos. The tribute “Εnvironmental education through lifelong learning” is implemented through the Operational Program & Human Resources Development, Education and Lifelong Learning&quot; and is co-financed by the European Union (European Social Fund) and Greek national funds. Its co-funded projects deal mostly with the improvement of education and employment in Greece. Its main targets relate to the development and promotion of human resources skills, activities against unemployment, strengthen social cohesion and social inclusion of vulnerable social groups, improvement of the quality of education &amp; lifelong learning, awareness on environmental education, linking education with the labour market.
The tribute “Εnvironmental education through lifelong learning” is implemented as part of the anniversary events for the 60 years of the European Social Fund.

The Film Festival entailed the Academy of Cinema with the participation of students from the Aristotle University of Thessalonica. Workshops were given by John Driendonks – professor from the Utrecht University of Netherlands.
An international committee attended by representatives of CIFFT (International Committee of Tourism Film Festivals) based in Vienna, in order to approve the Amorgos Film Festival as a member of it.
Distinguished speakers from the international board talked about the Film Commission and the importance and benefits of attracting foreign film production to a place where huge profits are made for the local and national economy not only by watching a film after its release, but also the benefits during filming. Present were 17 directors/producers who participated with their films, as well as, numerous journalists, bloggers, photographers, filmmakers from various countries.
The jury of the Festival, consisting of 5 members from Croatia, Austria, Poland and Greece, voted for the best films of the festival in 4 different categories. In total, 65 films from 25 countries competed, including Greek Films, Documentaries, Travel/Promotional and Commercials.

Cinema is considered to be a great tool for economic growth, and a tangible example is the”Big Blue”, which made Amorgos known worldwide. On the occasion of the 30 years since the
creation of the film, YPERIA 2017 was dedicated to the French producer Luc Besson. The Greek producer of the film Nikos Giannopoulos was with us and shared his feeling and memories of the shooting of the ‘The Big Blue’ in Amorgos 30 years ago. The 8th Amorgos Film Festival attended the President of the Greek National Tourism Organization, Mr. Charalambos Karimalis and the General Secretary, Mr. Constantine Tsegas.
The event was organized by Women’s Cultural Association of Tholaria in cooperation with the Region of South Aegean islands, under the auspices of GNTO, the Ministry of the Aegean
and Island Policy and with the support of the European Union and the Municipality of Amorgos. 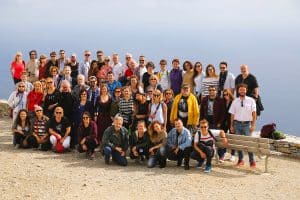