The Cultural Association of Tholaria – Amorgos and Aegialis Hotel & Spa ( www.aegialis-amorgos.com ) are pleased to organize, for the 12th consecutive year, the YPERIA International Convention of Sustainable Tourism, for Preservation and Protection of the Natural and Cultural Heritage of Amorgos.

The Convention aims to promote the natural beauty and culture of Amorgos, foster an exchange of ideas on cultural heritage preservation as well as present and promote current projects on the island of Amorgos.
The main scope of discussion will be «THE POSITIVE SIDE OF THE FINANCIAL CRISIS FOR GREECE» with the following topics: 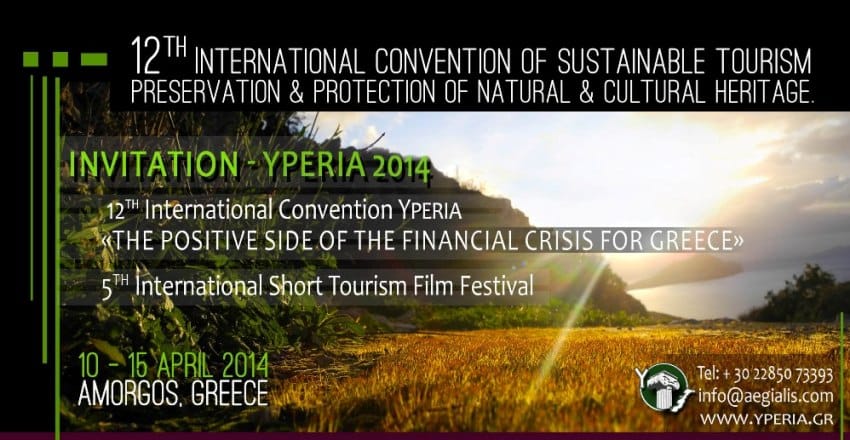 The Monastery of Virgin Mary Chozoviotissa of Amorgos, a project in process for inclusion in UNESCO’s World Heritage List, will also be brought up for discussion.

The 5th International Short Tourism Film Festival of Amorgos having “FILM TOURISM” as its central theme this time will take place during the works of YPERIA 2014.

Distinguished guests from around the world invited at the event, journalists, tourism professionals, producers etc. are kindly requested to contribute through newspaper or magazine articles, films or documentaries to the promotion of Amorgos and the projects discussed during the Convention.

The Convention will be held in English.
Accommodation, food and tours on Amorgos are offered by the organizers.